Gravity explored
This explanation of gravity explains a way in which it is possible to understand how gravity works.
Our current paradigm (believe/opinion/observation) is that mass is pulling on another mass. This website shows an alternative. "Is it possible for mass to generate acceleration by adapting to a gravitational field"?  This hypothesis shows it can. Even a small difference of gravity at atom level influences the centrifugal force, produced by the electron. It is that inbalans in centrifugal force in relation to the center of the atom that is causing impuls or acceleration. The amount of impuls when measured, is currently known as mass.
It is just a different way of interpretation.
This path of exploring gravity is constructed with Help of Coulomb's law, Kepler's laws, Newton's law's, Centripetal force, Centrifugal force and gravity
Coulombforce
Consider the interaction between a proton and electron within a hydrogen atom and calculate the amount of Coulomb force between the proton and neutron.
The Coulombforce in an atom equals the centripetal force ( force directed inwards to the center).

The amount of Coulombforce is explaining how strong the proton and electron are electriccally bound together
Mass electron
Based on the calculated Coulombforce the mass of the elektron can be defined.
A nice video of the capture of a electrons weight can be found on documentary tube. The video shows the path of an electron in a uniform magnetic field produced by two Helmholz coils. Based on the strenght of the magnetic field the mass of an electron is calculated.
It is an "old movie" and i don,t know who presents is. If anybody out there knows?, please let me know. She earns a proper description and reference. She helped me a lot.

Keep in mind that the calculated electron mass is a "constant" it is not the weight which we often refer to. A persons mass on Earth has for example a weight of 80kg. The same person would have a weight on the moon of 1/6*80 = appr. 13.3 kg
Integration of Kepler's Law, Coulomb's law, Centrifugal force and gravity
There is an analogue here. Kepler's Laws are describing the path of planetary motion. The "centripetal force" in Kepler's laws is the gravitation force as defined by Newtons law of attraction. (Statement here is "mass is pulling on another mass".)
Inside the hydrogen atom the centripetal force is the  "Coulomb force" as defined in Coulombs law. For Kepler's law of planetary motion and the forces within a atom, centripetal forces are in equilibrium with centrifugal forces.
This is interesting because in both cases the "centrifugal forces" (planetary and ”proton/electron” scale) are physical identical because both contain acceleration, generated by the  centripetal force.  Like gravity, acceleration has the dimension (m/s^2). This creates an environment where acceleration is fully complementary with the gravity field strength.
This approach clears the path, for gravity, to interfere with the centrifugal force of the electron and influencing its equilibrium with the Coulomb force inside the atom.
Compare the atom in a gravitational field with a balloon under water. The atom represents the balloon and the water represents a gravity field. The deeper the balloon gets submerged the higher the pressure (more gravity) on the balloon.  The balloons inside pressure will increase to match the increasing outside pressure.
so also with the atom. In similarity the gravity field strength is influencing the distance between the proton and the electron and thus influencing the diameter of the atom
This implies a lot. It would mean that this affects our experienced space-time frame.  An example: Say we have a chain of atoms with a  length of 1 meter on earth’s surface. We put this chain of atoms in orbit around the Earth at a height of 20.200 km (  height where the GPS satellite are orbiting the earth). The gravity is reduced to appr. 0.56m/s^2. Our "meter of atoms" has an increased relatively length because of the change in distance between all the electrons and protons in this "meter of atoms" causing a relative change in diameter of the atoms.  Every day the satellite travels around 78cm more than noticed. because it is rotating around the Earth and after exact 24 hours the distance doesn't match our reference ( earth's meter ) anymore. (See calculating time difference in the blog for full explanation and calculation)
How to explore the influence of gravity
Think of the balloon. When submerged just beneath the surface, the pressure on the top of the balloon is atmospheric, but on the bottom side of the balloon, the pressure is higher. This also occurs in a gravitational field, only the differences in gravitational fields are much smaller.
Difference this small are impossible to see and measure. This can be solved with an mathematical approach by defining an infinite small parameter for gravity. Basiccaly it can show us what the "infinite small change in gravity" is in relation to an "infinite small change in distance" to Earth's centre.

With help of Newtons law and substituting Earth’s mass it is possible to construct the gravity operator. See the tab of Gravity operator for full explanation
Newtons Law

With the atoms mass as m1 and r as the radius between earths center and the atom on earths surface.

Just like the force of gravity on Earth’s surface is depending on Earths radius , also is Earths mass related to its radius.
For Earths mass we can assume 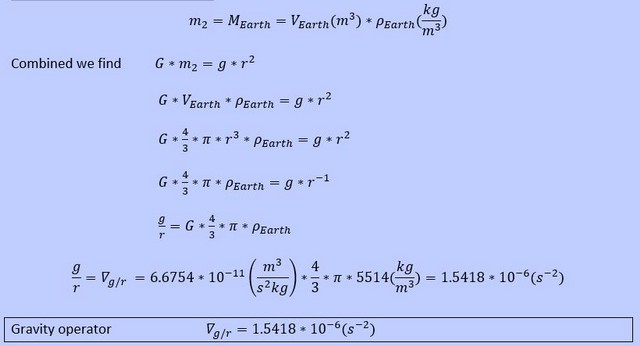 Whith the knowledge of this infinite small change in gravity on earth's surface, it is possible to find a value for the small change in gravity acting on the atom. This small gravity difference is interfering with the forces within the atom. The atom adapts by changing the distance between the proton and the electron on a way that equilibrium between Coulomb force and centrifugal force is maintained. This is arranged by changing the radius between proton and electron. Smaller distance between the particles increases Coulombforce
With help of the coulomb force acting between the proton and the electron in an atom in a gravitational field it is possible to find a value for the radius at the top and at the bottom of the atom.
The value of these radii can be found with use of Keplers law. See the tab of Kepler’s law for full explanation 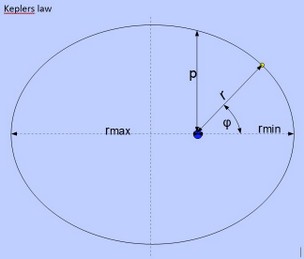 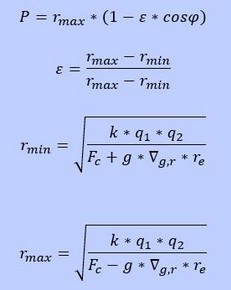 When absorbing the gravitational field into the atom, as reaction the distance between the electron and the proton changes. The difference in change in Coulombforce vs Centrifugal force, forces the electron to travel more in an elleptical shape.  See Tie-graph for more explanation. As result the centrifugal forces are not constant and the result is a generated force (Fgen).
The amount of change in Coulomb force/centripetal force is “like the balloon submerged under water”  opposite to maintain equilibrium. But the atom has free rotation and acts like an polar magnet to complete the equilibrium in the gravity field.
Within a constant gravity field and creating opposite forces this generated force is directed towards the center of the other mass. The atom now, shows acceleration produced by Fgen. When we stop the atom we experience this force as weight or mass. 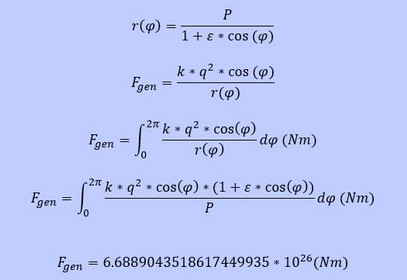 Fgen (generated force) represents a value with a dimension in Nm (Newton.meter).
The Newton meter is commonly known as torque. 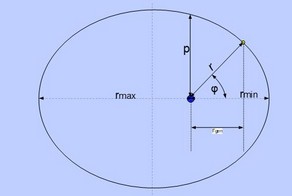 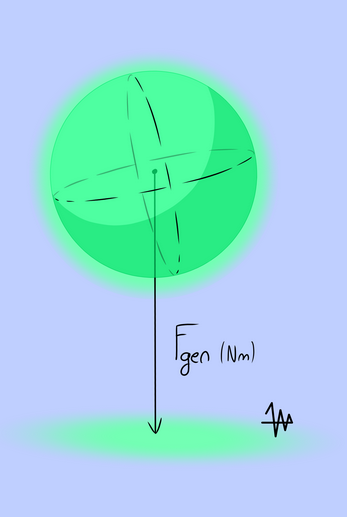 Summary: At this point we calculated a force (Fgen) generated by the atom by adsorbing the gravitational field-strength. From this point on we can compare the generated force with the force (F) = m*a as used in Newton's second law.
A difference in approach here is that Newtons second law is based on the idea that mass is pulling on another mass. “The appel falls to the ground, pulled by gravity“, The force F has the dimension Newton
Fgen however contains a force in Nm (Newton meter). This means this force is a torque. The electron has a constant pull on the proton and causes this torque.
When returning to our “famous apple” the acceleration in this hypothesis is generated within the atom  by continuous adsorbing the gravitational field strength. In other words, the apple travels by itself.
With this in mind and with the use of Newtons second law, we can define

The generated force is created as a product from angular impulse with acceleration.
(The net torque acting over a time interval is the angular impulse.)
For a rotating point mass ( like the electron) the inertia (I) is

With the continuous gravitation field, the generated rotational inertia will also be continuous.

The speed of the electron is also depending on the radius . The speed can be found with

The difference in dimensions of mass is caused by how to look to this system. When mass is pulling on another mass then mass has the dimension