Time
Time, A straight forward concept. It contains the past, present and future. So pretty convenient from that point of view. It’s the relativity of that “point of view” what makes time less predictable.
It started with Einstein who came up with the theory of special relativity. Special relativity linked space and time to one, “Spacetime”. According to Einstein “The laws of physics are the same in all inertial reference frames” and “speed of light is the same regardless of the motion of the observer or source”
It was Hermann Minkowski who constructed a graphical space-time diagram. His diagram uses distance on the X-axis and time on the y-axis, both with dimension lightyear. The purple 45degree line is the line on which a photon would travel ( lightspeed). This line is called the “Worldline”. The red frame is a different inertial frame. It is that from an object (think of an comet for example) traveling at ¼ of lightspeed. This red frame shows a certain contraction in time and distance (space-time) in relation to the black original diagram. The contraction can be constructed with use of the Lorentz factor ɣ. The Lorentz factor is named after Hendrik Lorentz and describes time dilatation and length contraction 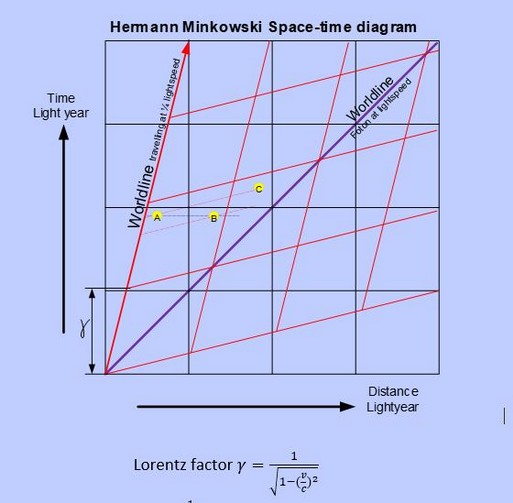 At ¼ lightspeed the Lorentz factor is 1.032795559. So with his factor, previous red frame is constructed.  Lets look to the three points A,B and C. According to the original frame of reference ( black diagram) events A and B are occurring at the same time and event C is happening later. But imagine ‘sitting on the comet’ in a nice comfy beach chair and looking to the same events as they occur. The difference now is that we refer from the red frame of reference. So from the comets point of view event B is first and then followed by event A and C simultaneously. So apparently time is not fixed and as shown here on the X-axis, space neither.
The Minkowski diagram is all about special relativity, but there is also general relativity.
General relativity is known as the influence of gravity on time. A well-known explanation is that gravity is bending the fabric of space time.  Einstein’s solution to calculate general relativity is based on field equations. Field equations are pretty abstract and a good mathematical knowledge is needed.
The effects of general and Special relativity are different. For example when checking the time development on a GPS satellite, two situations can be distinguished, A) the effect of general relativity is that time is 45 micro sec faster per day. B) Special relativity however causes the time on the satellite to get 7 microsec behind. https://asd.gsfc.nasa.gov/blueshift/index.php/2015/11/25/100-years-of-general-relativity/
So how does the hypothesis as described in this website explain time difference between a GPS Satellite in orbit in relation to earth’s surface. This hypothesis states that that with increasing gravity the atom gets compressed. The other way around is that a hydrogen in space at the GPS satellite is slightly larger than that of an hydrogen atom on Earth. The difference in size can be expressed in an ratio.
This ratio is useful because it can be used for defining the length of the circumference of the orbit of a GPS satellite, When measuring the circumference and multiplying it with this ratio, the circumference, would be 0.7697 meters larger than expected.
This looks minimal and neglectable, but when using this distance, it can very well describe the time difference.
example
Time difference at different gravity levels (general relativity).
A GPS satellite traveling at 20200km height will notice a gravitation value of about 0.56 m/s2.
An hydrogen atom on the satellite will compared to a hydrogen on earth have a slightly increased diameter. When calculated the ratio of increase of diameter is approx. 1.000000471698. This means when looking at the circumference of a satellite in meters we will actually have 0.7697 meter more per circumference than we would measure on earth.
For a full comparison this approach should be done in two steps. First approach depending only on gravity and second approach depending on the difference in velocity.  To start with the influence of gravity we “virtually match” (slow down) the speed of the satellite with the speed of Earth’s surface. Now we have the same inertial reference but with different gravity to compare.
Influence of gravity.
To calculate the general relativity the satellite moves with the same velocity as Earth surface, but with less gravity. The total path which will be travelled in 24 hours is that of the length of Earths circumference.
Path of the satellite however is influenced by gravity and has an extra length. (analogue with the increase in diameter of the atom). This extra length can be calculated with the increased ratio of the atom.

This means that within the same inertial system the travelled path of the satellite in fact is 0.18455 meters more than measured on earth. This additional length causes an time shift.  To visualise see following drawing. 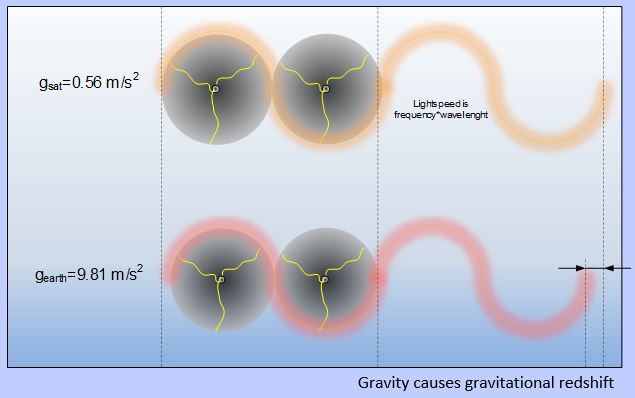 Due to reduced gravity the electromagnetic Coulomb force is influenced and so within this hypothesis the diameter of the atom is increased. If an photon would be emitted than its wavelength would adapt with the same ratio. When reflecting to current physics, this effect is known as “Gravitational redshift”
When measuring time on earth, 24hours are related to one rotation of earth. This means after 24 hours the starting position is the same as the end position. When looking to the satellite the endpoint after 24 Earth hours is not the same, it has already passed the endpoint and is 0.18455 meter further. To correct this we can slow down earths time or more convenient, speed up the satellite time.
To eliminate the 0.18455 meters additional length of the satellite we consider the time the satellite needs to pass this with its normal speed.
When looking to the speed of the satellite in relation to the wave, we can observe that 1 sinusoid is double affected by the ratio. So for calculating the satellite speed we divide the ratio by two with an reduced ratio (rr). This according following calculation.